Skip to content
Home/Fashion, Steampunk/Steampunk bags and accessories – get on board the trend

Steampunk bags and accessories – get on board the trend

Perhaps you’ve heard the word “steampunk” – it’s thrown around in fashion, bags, festivals (AfrikaBurn, for example). But what exactly does it mean?

Well, let’s start with the Oxford English Dictionary definition: a genre of science fiction that typically features steam-powered machinery rather than advance technology.

It’s believed that the term steampunk originated in the late 1980s as a tongue-in-cheek variance of cyberpunk. Science fiction author, KW Jeter, coined the word when he tried to find a general term for works by Tim Powers (The Anubis Gates, 1983), James Blaylock (Homunculus, 1986), and his own books called Morlock Night and Infernal Devices. All stories were set in the 19th century (usually Victorian).

In 1987, Jeter wrote a letter to science fiction magazine Locus and said:

Enclosed is a copy of my 1979 novel Morlock Night; I’d appreciate your being so good as to route it to Faren Miller, as it’s a prime piece of evidence in the great debate as to who in “the Powers/Blaylock/Jeter fantasy triumvirate” was writing in the “gonzo-historical manner” first. Though of course, I did find her review in the March Locus to be quite flattering.

Personally, I think Victorian fantasies are going to be the next big thing, as long as we can come up with a fitting collective term for Powers, Blaylock and myself. Something based on the appropriate technology of the era; like “steam-punks,” perhaps… 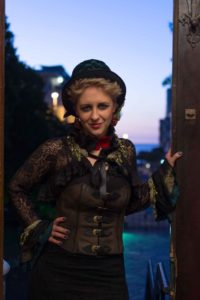 How to pull off the steampunk look

Buzzfeed put together a great article that gives six simple rules to follow when it comes to steampunk fashion – and they’re so easy, anyone can pull off the look!

Rule 1
Steampunk fashion is quite simply a real-world reproduction of the clothing that would be found in steampunk literature.

Rule 2
Buzzfeed says, “When in doubt, dress Victorian and then add.” The Victorians were the first to capitalise on steam technology, which is why much of the steampunk literature that exists is set during the Victorian era. Worried your outfit is “too Victorian”? Well, then you’re probably doing the steampunk look right!

Rule 3
Steampunk fashion is all about putting together an outfit that speaks to the senses (touch, sight), it needs to entertain the person wearing it and engage the person who sees it.

Rule 4
There’s no set steampunk colour – you may hear that people say steampunk fashion is only brown or black or white or light or dark… But that’s wrong – any colour is steampunk colour. So go wild and mix Victorian with vibrant pops of colour.

Rule 5
Steampunk is all about mixing and matching from different genres. As rule two states, “when in doubt, dress Victorian and then add”. Don’t feel like you have to settle in one genre.

Rule 6
Just have fun! You don’t need to follow the masses or feel as though you need to fit in by looking like everyone else. Be yourself and find your own steampunk look. 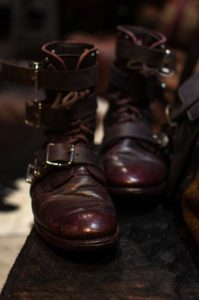 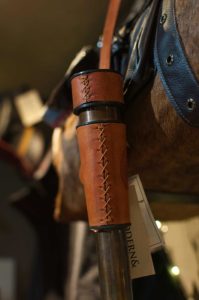 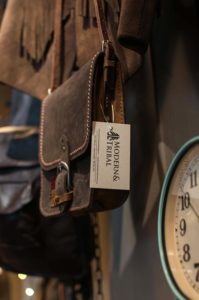 Perhaps now you’re more curious and keen to add some steampunk flair to your look. It can be daunting to go all in, so start simple. In fact, adding a steampunk bag to your wardrobe will be a definite conversation starter.

Brand New Second Hand was born on the road, out of a backpack almost a decade ago by Summer Human and Richard Stokes. Today they handcraft beautiful steampunk-inspired bags, belts and jewellery. They mainly use use re-applied/up-cycled buckles and fastenings that they predominantly salvage from military gear and horse tack.

“We feel that the term ‘handmade’ needs explanation these days,” says Richard. “Too many people sitting behind machines making stuff that they then describe as handmade. ‘Handmade’, to us, means that no power tools were used in the making of a product – we don’t even use sewing machines, every stitch is done by hand.”

According to Richard, “We also feel that when using leather, which is still one of the strongest materials available, it is important to put the product together in a way that compliments the strength of the leather. For this reason we do not thin out or shave our leather and we use heavy duty thread to give our products extra strength – there no shortcuts or built in obsolescence here.”

Each handbag, backpack, wallet or pair of steampunk goggles that Brand New Second hand produces is one of a kind and the attention detail is incredible. Our two favourite bags include:

This shape of this bag is unusual and definitely deviates from the “norm”. It’s made from leather and vintage kilim, and the clasp is an old horse harness part. It’s a definite one-of-a-kind. 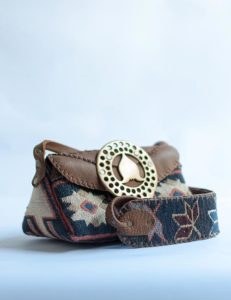 Another beautifully unusual steampunk-inspired sling bag made from leather and vintage kilim. The clasp is unusual as Richard and Summer has repurposed an old brass window clasp. 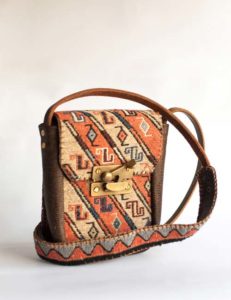 Check out more steampunk fashion accessories here. See something you like? Then get in touch and let’s make your steampunk dream a reality.